I often get phone calls that others might think strange. Recently I received such a call from my soft hearted colleague Ulrike McCarthy. She asked if I would come take some photos to help save the life of a young,Weißes Bergschaf, male sheep. The poor creature’s only mistake was to be born a boy in a herd that already had a Ram and future issues of fighting and inbreeding must be avoided.

So I packed my camera bag and grabbed the camera and fresh batteries and off we went. Friedl von Fridolin as he is now called was gathered with his flock out in a Schliersee pasture. His very protective mother watched our every move and inserted herself between us and her baby. They obviously had a deep bond. Friedl was easy to spot with his polka dot nose even amongst the other wooly thick coated lambs.

For the past 6 months Ulrike has watched over this little creature. Having a sheep of her own has been a lifelong dream for Ulrike so she was very invested in his well being. Determined to secure a safe place for Friedl, Ulrike set about to enlist other people in Schliersee passionate about the welfare of animals. She found a kindred spirit in one of our local residents, Margot Wolf. Margot was the perfect person to become Friedl’s God Mother. All the pieces were beginning to fall into place. to save Friedl.

With a benefactor was on board, Ulrike learned of the cost and logistics of keeping a farm animal when she herself lives in an apartment. The purchase price, winter feed costs, castration and vaccinations all add up. But I think she would tell you, little Friedl is worth every euro.

It is with great joy that I bring the news to you that Ulrike was successful. Friedl’s future is secure. Better yet, Friedl will continue to live out his life amongst his flock along side his loving family. He will continue to go to the woodland Winter pastures in Litzldorf with his farmer and this pasture is located close to where Ulrike works so she can visit Friedl weekly.

Friedl von Fridolin or Friedl as he is now known combines the Bavarian nickname for Fridolin, meaning peaceful one, the protector. Right in his name, the “Von” indicating high born status. A fitting name for such a noble creature to live out his bucolic existence. 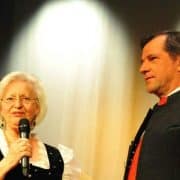 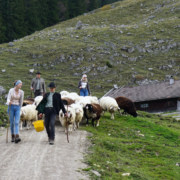 Rauhnächte…Old Rituals are Alive in Schliersee