On many snowy winter’s days in Schliersee we are faced with an important decision: “What are we going to play today?”  Should we go sledding, skiing, snowshoeing, cross country, ice skating or just take a beautiful hike. What a wonderful plethora of outdoor adventures await us each day.

This year we were treated to not just one, but two of our local lakes freezing completely over.  After approximately two weeks of sub-zero temperatures, Spitzingsee iced over and was quickly followed by Schliersee in the valley.  It was as if we had reclaimed land mass. Absolutely everyone cautiously started taking the first steps onto the ice.  Within days there were people playing hockey, ice skating behind baby carriages, curling and just walking their dogs.  There were times I couldn’t tell who was enjoying the ice more, man or beast. Tables and chairs were set about for sitting and sipping and enjoying the sunshine, while gazing upon the lakes icy surface.

For me, watching all the people gathering to share warm drinks and experience walking on the lake’s surface was a wonderful treat.  On one Saturday morning on Spitzingsee, there was even an alpine band playing.  The energy was infectious.  As the day progressed the long shadows grew across the ice and the fog rolled in and created incredible hoar frost in thick patterns like feathers.

Once the fresh snow fell so heavy that it covered Spitzingsee the ice became impossible to skate upon and at that time the cross country skiers and snowshoe walkers began to flood the lake’s surface.  Following the paths that formed like highways felt like you were discovering new lands.  Being able to see the mountains from this new perspective offered different views as well.  It’s wonderful how this well known landscape continues to change and offer new experiences through out the seasons. 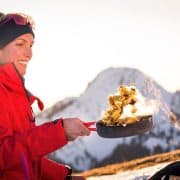 Alpen Plus Season Ski Pass and So Much More 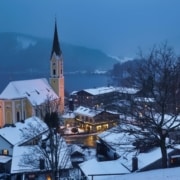 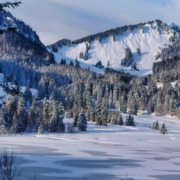 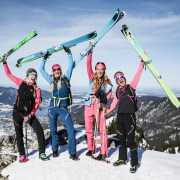